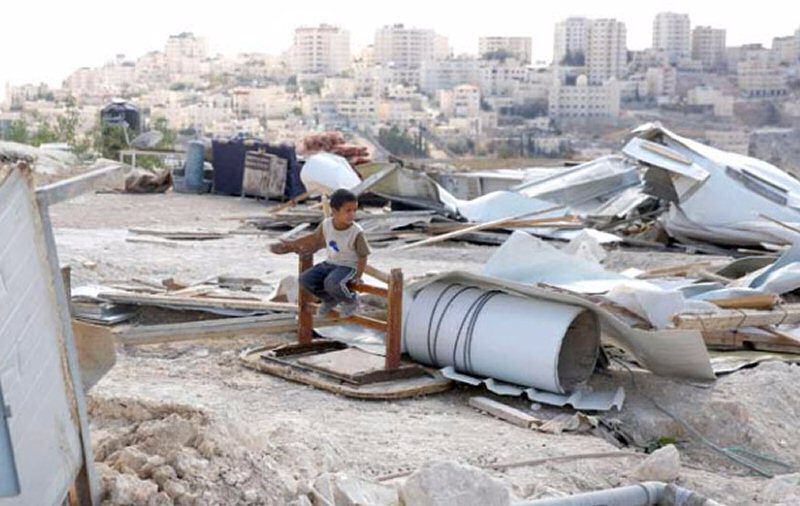 Israeli forces continue systematic crimes in the occupied Palestinian territory (oPt) for the week of 12 – 18 October, 2017.

20 Palestinian civilians, including 14 children, were wounded in the West Bank, Jerusalem and the Gaza Strip.

During the reporting period, Israeli forces wounded 20 Palestinian civilians, including 14 children; 4 of them including a child were in the West Bank while the 6 others, including 3 children, were in the Gaza Strip.  In the Gaza Strip, Israeli naval forces continued to chase Palestinian fishermen in the Sea and open fire at farmers and houses in the border areas.  The fishermen in the Sea were subject to 12 shooting incidents during the reporting period.

In the West Bank, 15 October 2017, a 13-year-old Palestinian child sustained shrapnel wound to the left leg when Israeli soldiers fired live and rubber-coated metal bullets, sound bombs and tear gas canisters at a group of youngsters and students, who threw stones at the soldiers after their incursion into Rojib village, southeast of Nablus.

On 16 October 2017, a young man was wounded to the foot when Israeli forces moved into al-Dheishah refugee camp, south of Bethlehem, and opened fire.  On 18 October 2017, 2 civilians were wounded in Nablus and Ramallah following the Israeli forces’ incursion into the cities and closure of 8 media offices.

In the Gaza Strip, the border areas witnessed protests against the on-going unjust closure on the Gaza population.  During the protests, the Israeli forces used force against the protestors and opened fire in order to disperse them.  As a result, 6 civilians, including 3 children, were wounded; Five were wounded in eastern Jabalia and the other in al-Brueij refugee camp.

In the pretext of targeting Palestinian fishermen in the Sea, PCHR monitored that Israeli forces escalated their attacks against Palestinian fishermen in the Gaza Sea although declaring fishermen are now allowed to fish until 9 nautical miles instead of 6.  This proves that the Israeli forces continue their policy of targeting fishermen and their livelihood.  During the reporting period, Israeli gunboats chased and opened fire at Palestinian fishing boats 12 times; 11 of which were in the north-western Beit Lahia and western Soudaniyah, west of Jabalia in the northern Gaza Strip and one was off Kahn Younis shore in the southern Gaza Strip.  On 15 October 2017, 4 fishermen were arrested off al-Wahah shore, northwest of Beit Lahia, and 8 fishing nets were confiscated.  The arrested fishermen were later released.

On 17 October 2017, Israeli gunboats fired shells at a Palestinian fishing boat sailing within 2.5 nautical miles.  As a result, the boat was destroyed and drowned in the Sea.

It should be mentioned that the Ministry of Agriculture said that Israel informed the Ministry of Affairs that the allowed fishing area expanded from 6 to 9 nautical miles starting at 15:00 on Wednesday, 18 October 2017.

In the context of targeting the border areas, on 13 October 2017, Israeli forces stationed along the border fence between the Gaza Strip and Israel, east of Khan Younis in the southern Gaza Strip, sporadically opened fire at the agricultural lands, east of Khuza’ah village and al-Sunati area in ‘Abasan al-Kabirah.  As a result, farmers and civilians panicked, but no casualties were reported.

On 15 October 2017, Israeli forces stationed along the border fence between the Gaza Strip and Israel, east of al-Maghazi in the central Gaza Strip opened fire at the lands and houses in the eastern areas.  No casualties were reported.

As part of the Israeli attacks against media, on Wednesday, 18 October 2017, Israeli forces closed 8 branch offices of 3 media companies in the West Bank, providing media services in Nablus, Hebron and Ramallah. These companies are PalMedia, Ram Sat, and Trans Media, noting that the offices are rented by the channels of al-Quds, Al-Aqsa and Palestine Today.  Israeli forces confiscated the broadcasting devices and equipment and closed the offices for 6 months without identifying the reasons in addition to arresting 2 journalists from Hebron.  These attacks are part of systematic steps to silence the voice of truth and cover up the serious violations of human rights in the oPt.

Measures to Create a Jewish Majority in occupied East Jerusalem

In the context of Israeli settlers’ attacks against Palestinian civilians and their property, dozens of settlers continued to raid al-Aqsa Mosque and its yards in East Jerusalem’s Old City under the Israeli forces’ protection and provoking Palestinians there.

As part of settlers’ attacks against Palestinian civilians and their property, on 12 October 2017, hundreds of settlers under the Israeli forces’ protection moved into several neighbourhoods in occupied East Jerusalem’s Old City coinciding with the last days of the Jewish Sukkot Holiday.  They attacked shops and damaged 4 vehicles and a motorbike in al-Wad neighbourhood in the Old City.  They also moved into the African Community neighbourhood near the Council “al-Majles” Gate, one of al-Aqsa Mosque’s gates, and threw stones, sticks and chairs at the houses’ doors and windows in the neighbourhood.

On 17 October 2017, the Israeli municipality bulldozers demolished 2 houses in Yasoul Valley neighbourhood in Silwan village, south of East Jerusalem’s Old City, without any prior warning under the pretext of building without a license.  Meanwhile, the Israeli forces were preparing to demolish a third house but the demolition was delayed after its owner resorted to the Israeli court.

Note: PCHR Keeps the names of the wounded persons.

Abu Rajab said that the two houses were built 14 months ago, and the Israeli Municipality handed them the demolition decision in last April and from that time the demolition decision was delayed several times. Lately, a hearing was held to delay the demolition and the judge has not yet considered the decision, pointing out that the family submitted the documents requested by the court and began the licensing procedures.

Abu Rajab also pointed out that his family told him about raiding the house to demolish it when he was in his work. When Abu Rajab returned, he could not enter his house or helping his family in vacating the contents due to the closure imposed on the area. He added that they demolished the houses without vacating all the contents.

It should be noted that the house sheltered 9 persons, including 2 children, and after demolishing the house, Abu Rajab family set a tent in front of their house rubble. The family became homeless due to the demolition.

On Thursday, 12 October 2017, hundreds of Israeli settlers, under the Israeli forces’ protection, moved into many neighborhoods in occupied East Jerusalem’s Old City, concurrently with the latest days of Jewish Sukkot Holiday. The Israeli settlers attacked shops and damaged 4 vehicles and a motorcycle in al-Wad neighborhood. They also moved into the African Community neighborhood and threw stones, chairs, and sticks at the houses’ doors and windows. Dozens of Palestinian young men gathered to stop the Israeli settlers’ attacks. As a result, 4 Palestinian civilians sustained wounds and fractures while Ya’qoub al-Dabbagh (13), was arrested. Eyewitnesses said to PCHR’s fieldworker that the Israeli settlers severely beat up Ibrahim al-Hashlamoun, raided his shop and damaged its contents in Al-‘Amoud Gate area. They also raided a house belonging to Maher Abu Isneinah on al-Wad Street. Eyewitnesses added that the Israeli forces only moved the Israeli settlers away from al-Wad Street and when the settlers arrived at al-Amoud Gate area, they beat Ibrahim up after raiding his shop.

Fully detailed document available at the official website of the Palestinian Centre for Human Rights (PCHR.)