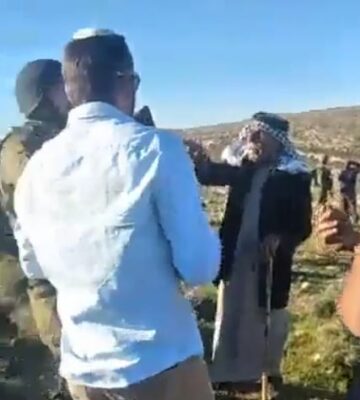 Ahmad Ghazal, the deputy mayor of Kisan, said the colonists attacked the farmers while planting their lands, southwest of the village.

He added that the lands are owned by Ayyoub Yousef Obeyyat, near the illegal Abi Hanahal colony which was built on stolen Palestinian lands.

Ghazal also said Israel soldiers arrived at the scene, and fired many gas bombs and concussion grenades at the Palestinians, instead of removing the assailing colonists, and forced the farmers to leave their lands.

Kisan village witnesses escalating Israeli violations carried out by the soldiers and the colonists. The assaults include attacking farmers and shepherds, occupying their lands, in addition to uprooting the trees and plants.

Many colonists also unleash their dogs on the farmers to force them out of their farmlands.