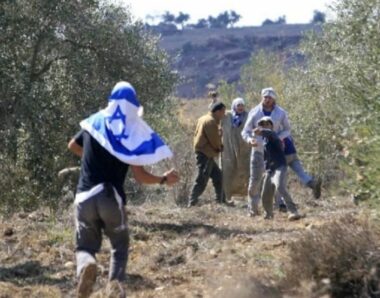 Many fanatic illegal Israeli colonists attacked, Monday, Palestinians while picking their olive trees in their orchards in Burqa village, south of the central West Bank city of Ramallah, injured five of them and punctured the tires of two cars.

Adnan Jaber, the head of Burqa Village Council, said the colonists invaded Palestinian olive orchards north of the village, and tried to force them out of their lands.

He added that the Palestinians intercepted the assailing colonists and attempted to stop them, and that the colonists started hurling stones at the residents mildly wounding five of them.

The colonists also punctured the tires of two Palestinian cars, before the soldiers arrived at the scene.

The colonists always escalate their violations against the Palestinians and their orchard during the olive harvest season, including when they cut and uproot hundreds of trees, burn orchards or harvest them to steal the produce, in addition to preventing the residents from entering their lands. Such attacks have recently taken place in various areas of the West Bank, including Salfit, Nablus and Ramallah.

In related news, the Israeli government has approved the construction of hundreds of units in an illegal colony, built on stolen Palestinian lands in Wadi Fukin village, west of Bethlehem, south of occupied Jerusalem in the West Bank.