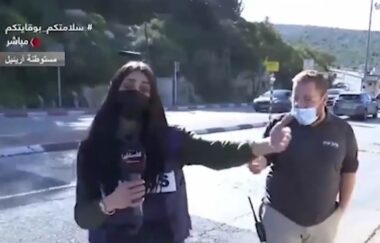 Several Israeli colonists attacked, Monday, a crew of Palestine TV near the entrance of Ariel colony, which was built on stolen Palestinian lands, near Salfit, in central West Bank.

Palestine TV said the colonists attacked its crew members while filming a documentary about the escalating illegal Israeli colonialist activities and the dangerously increasing assaults by the colonists against the Palestinians and their property. It added that a few guards of Ariel illegal colony also tried to disrupt the filming of the report by using loudspeakers and intercepting the journalists.

The guards also demanded to see the ID cards of the journalists, including the TV anchor who was conducting a live report, and informed her and her two colleagues, including the cameraman, that they are not allowed to be there, in addition to pushing them around.

The guards took the ID cards of the Palestine TV crew and took pictures of them using a cell phone.

On Monday at dawn, several Israeli army vehicles invaded Jenin refugee camp, and Qabatia town, in the northern West Bank governorate of Jenin, before the soldiers stormed homes and abducted four Palestinians, including one who was shot in the chest in his home.

In related news, the abducted eight Palestinians, including five who were kidnapped by undercover forces, in the Ramallah governorate, in central West Bank.