Israeli Soldiers Abduct Four Palestinians, Including One Who Was Shot In Chest, In Jenin 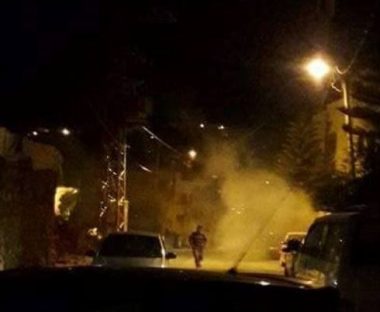 Several Israeli army vehicles invaded, on Monday at dawn, Jenin refugee camp, and Qabatia town, in the northern West Bank governorate of Jenin, before the soldiers stormed homes and abducted four Palestinians, including one who was shot in the chest in his home.

Media sources said dozens of soldiers invaded Jenin refugee camp, before the army stormed the home of Nour al-Beetawi, and shot him with a live round in the chest, before moving him to an unknown destination.

The soldiers also abducted Ahmad Marwan al-Ghoul from his home in the refugee camp.

They added that the soldiers also stormed and ransacked homes in Qabatia town, south of Jenin, before abducting two young men, identified as Sultan Nazzal and Sanad Nazzal.

In related news, the abducted eight Palestinians, including five who were kidnapped by undercover forces, in the Ramallah governorate, in central West Bank.