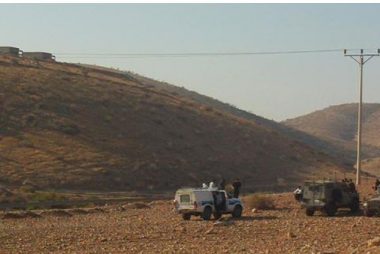 Extremist Israeli colonists, illegally living on Palestinian lands, attacked many Palestinian shepherds, Friday, and forced them out of grazing lands, in the Northern Plains of the occupied West Bank.

The colonists came from the illegal Rotem outpost, chased the farmers out of the grazing lands, and threatening to shoot them if they do not leave the area.

One of the shepherds, identified as Morad Abu Mohsen, said that the colonists were backed up by Israeli soldiers, who also attacked the Palestinians, and forced them away.

It is worth mentioning that farmers and shepherds in the area face constant violations and assaults by both the soldiers and colonists.