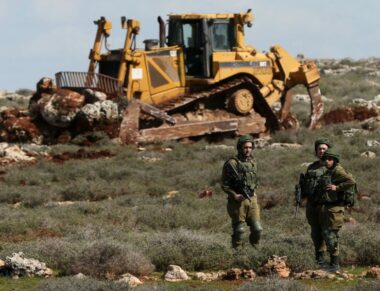 Israeli colonialist settlers, illegally squatting on Palestinian lands, invaded farmlands near Ein al-Baida village, in the Northern Plains of the Jordan Valley of the occupied West Bank and bulldozed them.

The colonists bulldozed the lands before bringing olive saplings to plant them there, a move that constantly precedes their illegal takeover.

Loca sources in Ein al-Baida said several Palestinians from the village own the lands and have the official deeds.

It is worth mentioning that the colonists have already illegally occupied large areas of Palestinian farmlands and grazing areas used by the local shepherds.

In related news, a group of colonists invaded an archeological site in the al-Hafriyya area in al-Far’a Valley, south of Tubas in northeastern West Bank, while Israeli soldiers surrounded it to prevent the Palestinians from entering it.

Locals said the colonists came in five buses and were accompanied by several army jeeps and added that this marks the first time the colonists invade this area.

On Friday at dawn, the soldiers ‘Anin village and Ya’bad town, west of the northern West Bank city of Jenin, and abducted seven Palestinians, including a father and his three sons.

In related news, the soldiers invaded, on Friday at dawn, Beita village, south of the northern West Bank city of Nablus, and abducted a Palestinian from his home.