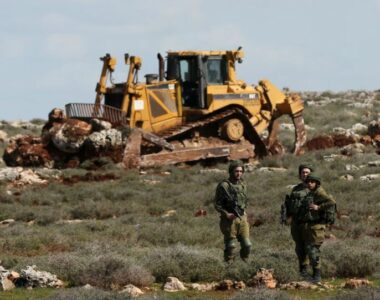 Rateb Jabour, the coordinator of the National and Popular Committees against the Annexation Wall and Colonies in Hebron, said the colonists came from the illegal Ma’on and Karmiel colonies, which were built on Palestinian lands near Um al-Kheir and at-Tiwana areas, east of Yatta.

Jabour added that the colonists, accompanied by soldiers, used bulldozers to uproot the lands, to expand their illegal colonies and outposts. He stated that the soldiers, and the colonists, have recently escalated their violations against the Palestinians, especially in the Masafer Yatta area, having demolished three homes, one room and one shed, in the last ten days, in addition to issuing demolition orders targeting seven other Palestinian homes.