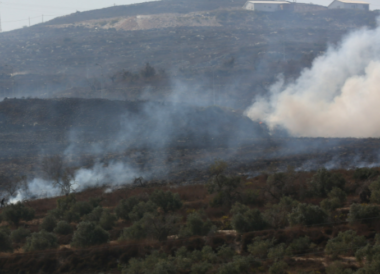 Media sources in Nablus said the colonists invaded the ar-Ras area, where they have been constantly attempting to illegally occupy Palestinian lands and install outposts and burnt dozens of trees.

They added that Palestinian firefighters and many residents rushed to the lands and managed to extinguish the fire before it spread to more lands, especially in the areas where the Palestinians recently planted dozens of saplings.

Furthermore, dozens of Palestinians suffered the effects of tear gas inhalation, after the soldiers attacked nonviolent protesters who marched to their lands and orchards, threatened with the illegal annexation, especially since the colonists recently installed an outpost.

It is worth mentioning that the colonists recently installed mobile homes on the Palestinian lands, and prepared agricultural roads so that they can occupy them, and expand their outposts.

It is worth mentioning that there are 23 illegal colonies and six outposts on Palestinian lands in the Salfit governorate.

The colonists are trying to occupy the ar-Ras area and its surroundings as part of the attempts to pave new roads that would link outposts with the illegal Ariel and Burkan colonies, which were built on lands owned by the Palestinians from various villages and towns north of west of Salfit.