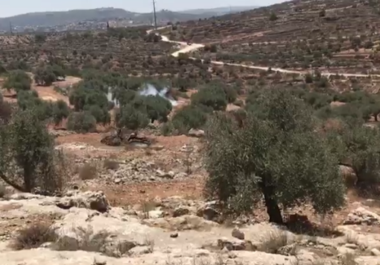 Media sources said hundreds of Palestinians marched towards their lands and held the weekly protest in the area where the illegal Israeli colonialist settlers are squatting on their lands.

The soldiers fired a barrage of gas bombs, concussion grenades, rubber-coated steel bullets, and rounds of live ammunition at the Palestinians, and chased many of them while trying to force them out of their lands.

Ahmad Jibril, the head of the Emergency Unit of the Palestinian Red Crescent Society (PRCS) in Nablus, said the soldiers injured at least 400 Palestinians.

Jibril said the soldiers shot three Palestinians with live fire, including one who was shot in the mouth and suffered moderate-to-serious wounds, and 69 Palestinians with the rubber-coated steel bullets, in addition to causing 245 to suffer the effects of teargas inhalation.

He added that 49 Palestinians were injured after falling on rocks while the soldiers were chasing them, in addition to 13 who were directly shot with gas bombs and 23 who suffered burns.

The Israeli army is trying to stop the ongoing processions carried out by the Palestinians, including nighty protests, which have been ongoing since the illegal Israeli colonialist settlers, occupied the mountain top and installed an outpost in early May of this year.