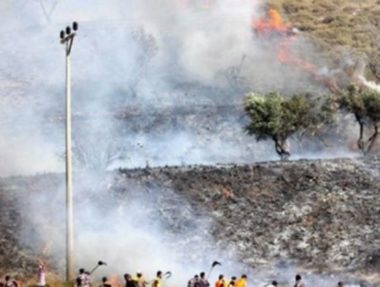 He added that the colonists then set the invaded lands ablaze, in the al-Lahaf ash-Shamali area, between the two towns.

Ghassan said that the attack by colonial settlers was concurrent with an Israeli army attack, as the army’s bulldozers began razing some farm lands adjacent to the illegal Yitzhar settlement.

Daghlas noted that the razing comes under the pretext of extinguishing the fires, however it is likely a prelude to constructing a settlers-only bypass road that would take over more Palestinian-owned farm lands.

Israeli colonial settlers’ attacks on nearby Palestinian farm lands, have dramatically increased over the past several weeks in many West Bank villages.

On Thursday evening, many colonists hurled stones at Palestinian cars south of Huwwara town, south of Nablus, at the junction that leads to the Qalqilia governorate, in northern West Bank.