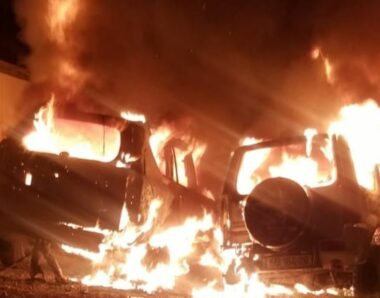 Media sources in Beit Iksa said the cars are both owned by a local man, identified as Hamdan Karshan.

They added that Palestinian firefighters rushed to the town, and extinguished the fire; however, the flames have already destroyed the two vehicles.

The colonists also wrote racists anti-Palestinian graffiti on walls on the same street where the two cars were torched.

Following the attack, Israeli soldiers invaded the town and interrogated many Palestinians while inspecting their ID cards instead of trying to locate the assailants.

It is worth mentioning that this is the fourth attack of its kind against Beit Iksa this year alone.