Soldiers Invade And Ransack Shops, A Home, In Hebron 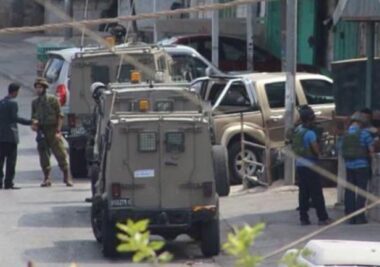 Israeli soldiers invaded, on Friday at dawn, several shops and one home in Hebron city, and Beit Awwa nearby town, in southern West Bank, in addition to installing a roadblock. The soldiers also invaded a home near Bethlehem.

Several army jeeps invaded the al-Jilda area in Hebron city, before the soldiers broke into and violently searched many shops, causing damage.

Owners of two of the invaded shops have been identified as Ziad Mojahed and Tamer Mojahed.

In addition, the soldiers invaded Beit Awwa town, west of Hebron city, before storming the home of Mahmoud Sweity, and violently searched the property, causing damage.

In related news, the soldiers installed a roadblock at the northern entrance of Hebron city, before stopping and searching dozens of cars, and interrogated many Palestinians while inspecting their ID cards.

It is worth mentioning that the soldiers also invaded Teqoua’ town, southeast of Bethlehem, south of occupied Jerusalem, before storming and searching the home of Khader Abdullah al-‘Amour, and summoned him for interrogation in Etzion military base and security center.

During the invasion into Khader’s home, the soldiers confiscated the cell phone of his son, Mo’taz, who was abducted by the army three days ago.