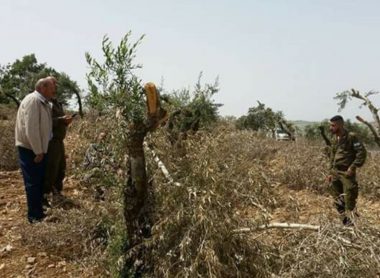 A group of extremist Israeli colonists uprooted, Friday, at least 100 olive trees from an Orchard in Burin village, south of the northern West Bank city of Nablus.

The assailants, who came from a nearby illegal colony, invaded an orchard owned by Mohammad Raja, and cut 100 trees; many of them were planted more than 60 years ago, in addition to cutting several almond trees.

The attacked land is the only source of livelihood to Mohammad and his family. Yahia Qadous, the head of Burin Village Council, said the colonizers also wrote racist graffiti, including “Death To Arabs”, on big rocks in the orchard.

He added that the attack is part of numerous similar violations targeting many orchards, homes and property in the village.

In related news, several extremist Israeli colonists, living in an illegal colony which was built on private Palestinian lands, invaded the village of Burqa, east of the central West Bank city of Ramallah, wrote racist graffiti and punctured tires of many cars.