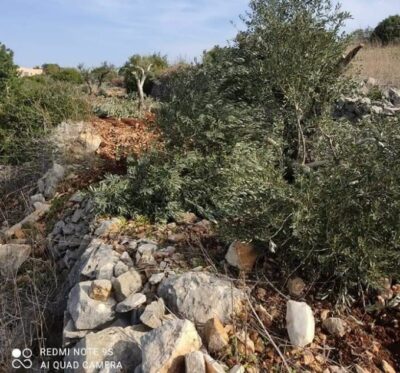 A group of fanatic illegal Israeli colonists invaded, late on Saturday at night, a Palestinian orchard in Bruqin and Kafr ed-Deek towns, west of Salfit, in central West Bank, and cut many olive trees.

He added that the trees were planted by his family, in their own orchards, 50 to 60 years ago.

Al-Ahmad stated that the colonists came from the illegal Bruchin nearby colony, which was built on private Palestinian lands.

“The attack is not the first; the colonists started invading my orchards three years ago. I own ten Dunams (2.47 Acres) of land in this area,” he said, “Last year, the Israeli assailants burnt two olive trees I planted many years ago, after pouring chemicals on them.”

It is worth mentioning that the colonists also demolished walls of an archaeological Palestinian structure on his land.

“Despite their ongoing aggression and violations, we are here to stay,” al-Ahmad said, “We will tend to our lands, the lands of our forefather, no matter what and at any cost.”