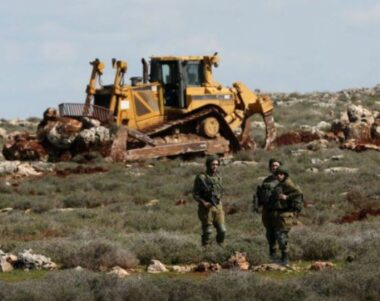 Israeli soldiers confiscated, Sunday, two Palestinian bulldozers, and prevented the farmers from entering their own lands in ‘Atouf village, in the Northern Plains of the Jordan Valley, in the occupied West Bank.

Mo’taz Bisharat, a Northern Plains official at the Tubas Governorate, said the soldiers denied the Palestinians access to their lands, and forced them to leave the area.

The Israeli army did not provide any explanation for the violation, but the move is similar to numerous incidents in which the Palestinians were denied access to their own lands, especially in areas known for repeated invasions by the illegal colonists who usually cut trees, flood the lands with wastewater mixed with chemicals or install outposts.

Late on Saturday at night, a group of fanatic illegal Israeli colonists invaded a Palestinian orchard in Bruqin and Kafr ed-Deek towns, west of Salfit, in central West Bank, and cut many olive trees.

Atouf is one of 38 communities, inhabited by around 6200 Palestinians, who are forced to obtain permits from the Israeli occupation authority to enter and even live in their communities.

The army also frequently displaces Palestinian Bedouin communities to conduct live-fire military drills, devastating the lands, including grazing areas and farmlands, in addition to dozens of casualties, including fatalities.