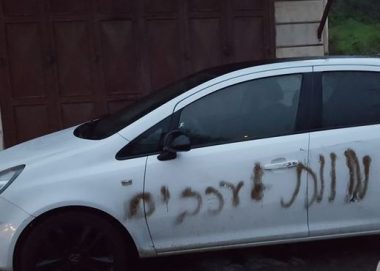 Media sources in Nablus said the colonists broke the windshield of several parks Palestinian cars and punctured the tires of another car.

They added that the assailants also invaded Jeet village, and punctured the tires of three cars, in addition to writing graffiti, including “Price Tag,” and “Death To Arabs.”

Price Tag is a term frequently used by extremist Israeli colonists when they attack Palestinian property, including when they burnt or defaced, cars, homes and places of worship.