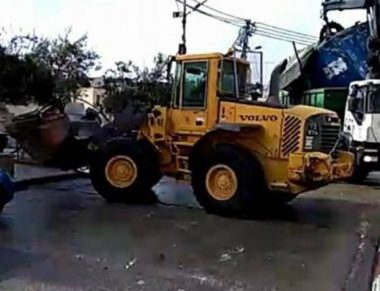 Israeli soldiers, and members of the City Council in occupied Jerusalem, demolished two commercial structures, in the al-‘Isawiya town, and also cut and uprooted trees.

Mohammad Abu al-Hummus, a member of the Follow-Up Committee in al-Isawiya, said the soldiers surrounded the town, before invading it, and bulldozed the two structures.

He added that the two structures were used as small restaurants, proving pizza, cold and warm drinks; one of them was built ten years ago, and one since about two years. Both were built in the yard of the local mosque.

During the destruction of property, the Israeli bulldozers cut and uprooted several trees.

Abu al-Hummus stated that the ongoing illegal Israeli demolitions of homes and property are part of Israel’s collective punishment policies, and the attempt to remove the indigenous Palestinians.

He also said that the soldiers invaded the town, Monday, and fired many live rounds, rubber-coated steel bullets and gas bombs at Palestinian protesters.

Some of the bullets struck many homes in the town, causing damage and anxiety attacks among many residents, mainly the children.

It is worth mentioning that the army have been carrying out daily invasions into the town, and completely isolates it every night.