Israeli Colonists Force Farmer Out Of His Land, Take His Tractor, Near Ramallah 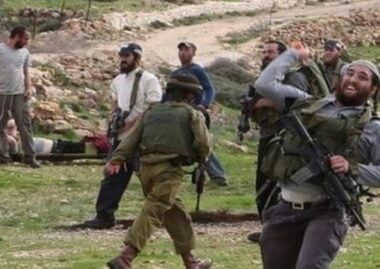 Israeli colonialist settlers, illegally squatting on Palestinian lands, attacked a Palestinian farmer and stole his tractor, while he was working on his land in Deir Nitham village, north of the central West Bank city of Ramallah.

The owner of the lands, Monjid Tamimi, said the colonists invaded his land, near the illegal Halamish colony, which was built in stolen Palestinian lands, and attacked him while plowing his land.

He added that the colonists stole his tractor before forcing him out of his own land, and threatened to harm him if he returns.

Eyewitnesses said many Palestinians noticed the attack and rushed to aid the farmer, before Israeli soldiers arrived at the scene and started firing gas bombs at them, causing many to suffer the effects of teargas inhalation.

Tamimi said the attack is not the first, and added that he has the official deeds proving his ownership of his lands (35 dunams), and stated that, a week ago, the soldiers prevented him from entering his lands after alleging the area is “state-owned.”

In related news, several Israeli colonists attacked a Palestinian farmer and his wife while working on their lands in the Wadi Qana area in Deir Istiya town, northwest of Salfit, in central West Bank.