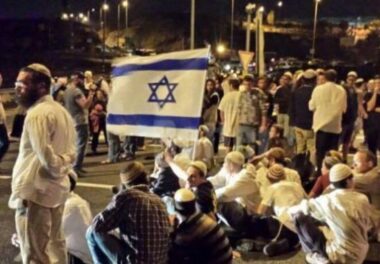 Israeli colonists hurled stones, on Saturday evening, at many Palestinian cars near Nablus, in northern West Bank, and north of the central West Bank city of Ramallah, in addition to closing major junctions near Hebron, in southern West Bank, and Bethlehem, north of Hebron city.

Media sources stated sources that the colonists gathered on the main road near Shilo and Aliyah illegal colonists, between Turmus Ayya village, north of Ramallah, and the al-Lubban ash-Sharqiya village, south of Nablus, and hurled stones at many Palestinians cars, causing damage.

The sources added that the colonists blocked Palestinian traffic during the attacks, and tried to chase the Palestinian cars.

Meanwhile, Israeli soldiers installed two military roadblocks at the main entrances of al-Lubban ash-Sharqiya and Turmus Ayya villages, and denied the Palestinians access to their communities by forcing them to turn around and take longer alternate roads.

It is worth mentioning that the colonists have been attacking Palestinian cars on a daily basis over on the Nablus-Ramallah road over the past several weeks, causing damage to hundreds of cars, in addition to blocking Palestinian traffic, especially at night.

Eyewitnesses said Israeli soldiers were present but did not attempt to remove the colonists, especially when the blocks roads leading to and from Hebron.