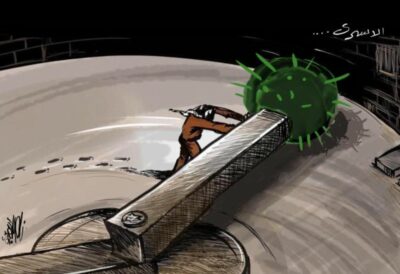 The Palestinian Prisoners’ Society (PPS) has reported, Saturday, that three additional detainees, held by Israel, have been officially diagnosed with the coronavirus, raising the total number of infected detainees to 250.

The PPS said most of the infections took place in Gilboa’ Israeli prison, especially in November of 2020, and added that the infected detainees are also facing very dire living conditions in section 8 of Ramon prison in the rooms dedicated for isolating them but without actually providing them with the needed medical care.

It added that the section is already overcrowded, especially after Israel transferred infected detainees from the Negev Detention Camp and Ramon prison over the past few days.

The PPS stated that instead of collecting samples from the detainees who are showing symptoms, the Israeli Prison Authority forces them to wait, an issue that raises their anxiety and causes the virus to spread.

It said that Israel is using coronavirus as a new tool to inflict further punishment on the detainees and deny them basic rights.

The PPS also said that Israel controls the information about infections among the detainees, especially due to the absence of international monitoring of the prisons where the Palestinian political prisoners are held.

It called on all related parties, mainly the International Red Cross and the World Health Organization, to oblige Israel to provide the detainees with the required medical attention, especially the coronavirus vaccines, after Israel announced it would not be vaccinating the detainees.

The PPS also called for forming an international medical committee that would supervise the distribution and administration of the vaccine.