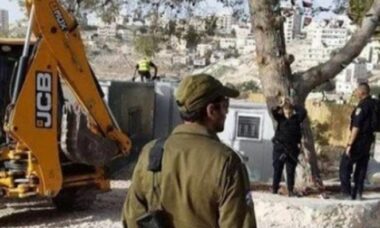 Baher Yassin, the head of ‘Aneen Village Council, told the Palestinian News & Info Agency (WAFA) that the soldiers demolished the eleven kiosks in the ath-Thaher area, near the local school, close to the illegal Annexation Wall.

Yassin said the kiosks are owned by Radi Yahia Khaddour along with his brothers Mahmoud and Mohammad, Aseed Yousef Issa, and his brothers Walid and Yazid, in addition to Assem Dawwas Issa, Mohammad Nader Issa, Hakam Hussein Yassin, and his brother Ashraf.

Aneen is subject to constant Israeli violations, including invasion and violent searches of homes, and the abduction of many residents, in addition to attacks targeting the villager’s lands.