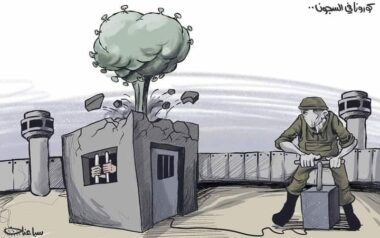 Israeli sources have reported, Sunday, that the Israeli Prison Authority will administer coronavirus vaccines to the Palestinian detainees starting sometime this week, after the Israeli Public Security Minister Amir Ohana withdrew his objection.

The sources stated that administering the vaccine to soldiers, jailors and staffers of the Israeli prisons and detention centers will conclude Sunday, and the next step would be to administer the vaccine to the detainees.

The Israeli Prison Authority stated that any Palestinian detainee who refuses to be vaccinated will have to sign official documents to voluntarily decline the inoculation.

It added that the inoculation would take place according to predefined priorities set by the Health Ministry, adding that all prisoners will have the option to be vaccinated.

It is worth mentioning that the number of Palestinian detainees in Israeli prisons who have been officially diagnosed with the coronavirus has arrived to 250.

On January 14th 2021, UN human rights experts called on Israel, the occupying power, to ensure swift and equitable access to COVID-19 vaccines for the Palestinian people under occupation, the United Nations Human Rights Office of the High Commissioner said.

“Israel’s roll-out of its vaccination programme against the COVID-19 pandemic for its citizens has been impressive. In this early stage of the worldwide inoculation programme, Israel has delivered the vaccines to a higher percentage of its citizens than any other country,” the experts said. “We understand that Palestinians with resident status in occupied East Jerusalem have been offered the vaccines by Israel” the office said.

“However, Israel has not ensured that Palestinians under occupation in the West Bank and Gaza will have any near-future access to the available vaccines. The COVID-19 pandemic has been ravaging the West Bank and Gaza in recent months, and has fractured an already badly under-resourced Palestinian health care system. We are particularly concerned about the deteriorating health situation in Gaza, which suffers from a 13-year-old blockade, serious water and electricity shortages, and endemic poverty and unemployment,” it added.

As the occupying power, Israel has a responsibility under international law, including article 56 of the Fourth Geneva Convention, to ensure “public health and hygiene in the occupied territory.”

It is worth mentioning that the Israeli Public Security Minister Amir Ohana initially objected to vaccinating the detainees, and said, “there should be no inoculating security prisoners without approval and in line with vaccination progress among the general population.”