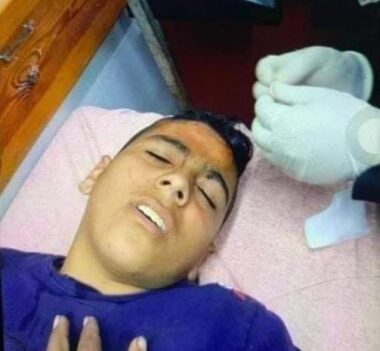 Israeli colonists, illegally squatting on Palestinian land, have escalated their attacks against the Palestinian people, injured one child in addition to attempting to ram three child siblings with a car.

They added that the child, Mahmoud Tamiza, suffered cuts and bruises to several parts of his body.

In addition, a female Israeli colonist drove her car into Jabal Jales area, in Hebron city, and attempted to ram three child siblings.

Resident Rashid Tamimi said the colonist, from the illegal Havat Gal outpost, sped towards the children, identified as Ghazal Mahmoud Baradeyya, 11, along with her siblings, Nour, 8, and Mustafa, 3.

He added that a Palestinian man noticed the colonist speeding towards the children, and barely managed to move them away from the car’s path.

Ya’bad is surrounded by the illegal annexation wall and various colonies, in addition to being subject to frequent Israeli violations targeting the Palestinians and their property.

The village is surrounded by colonies of the Gush Etzion colonialist block, south of Bethlehem, and witnesses repeated violations.