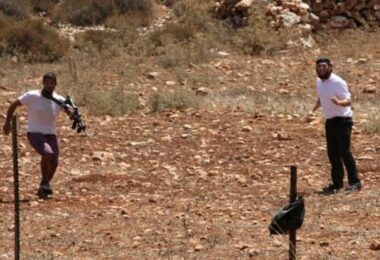 Ghassan Daghlas, a Palestinian official who monitors Israel’s illegal colonialist activities in northern West Bank, said the colonists came from the Yitzhar colony, which was built on stolen Palestinian lands, south of Nablus.

Daghlas added that the colonists attacked two land surveyors, identified as Morad Najjar and Sabe’ Salim Odah, in the al-Lahaf area south of Huwwara, and fled the scene.

Palestinian medics were then called to the scene and moved the two men to a hospital in Nablus.