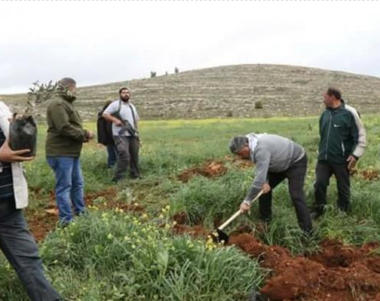 He added that the colonists planted dozens of olive saplings in the grazing lands, which raised fears that they intend to illegally annex them to their colony.

It is worth mentioning that the colonists usually invade and uproot Palestinian farmlands and orchards in the area, and several parts of the occupied West Bank, in addition to flooding other lands with wastewater mixed with chemicals.

On Friday evening, Israeli soldiers invaded Nahhalin town, west of Bethlehem, and fired many gas bombs and concussion grenades in the town’s center.