Palestinians across the West Bank on Friday took part in non-violent action to commemorate the 43rd anniversary Land Day, and in solidarity with Palestinian prisoners in Israeli jails, Maan News Agency reported.

Palestinians in Kufur Qaddoum in the northern West Bank have staged weekly peaceful protests since 2011 to object to the annexation wall and the closure of the road to Nablus since 2003.

On March 25, 2019 in the southern Israeli Negev prison, ninety Palestinian prisoners were handcuffed to their beds overnight, harsh restrictions that were imposed by the Israeli Prison Services (IPS) after 2 Israeli prison guards were stabbed by Hamas affiliated prisoners. The ensuing raids on prisoner cells, caused the injuries of hundreds of Palestinian prisoners. 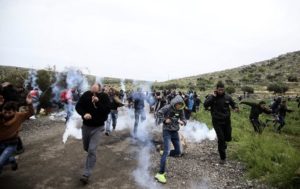 in al-Mughayer village gathered to protest the Israeli settlement being constructed on village land in contravention of international law.

They were met by a barrage of tear gas fired by Israeli soldiers who had invaded the village in anticipation of what has become a weekly Friday protest in the village.