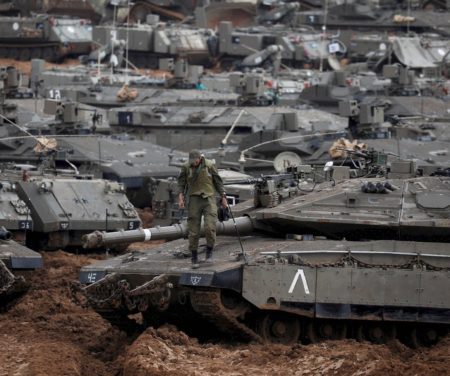 Two Palestinians were moderately injured by Israeli gunfire Friday at protests on the eastern border of the Gaza Strip. The protests were smaller than the usual weekly protests have been, as Palestinians in Gaza gear up for major protests on Saturday to commemorate the 43rd Palestinian Land Day.

It was Land Day 2018 that sparked the weekly protest movement known as the Great March of Return, which has taken place every week since March 30, 2018, and has resulted in the deaths of nearly 200 Palestinian protesters shot by Israeli sharpshooters, and the serious injuries of more than 11,000, according to the Palestinian Center for Human Rights.

Friday’s protests took place in four locations along the eastern border of Gaza, with Israeli tanks and troops lined up on the other side of the border. The troops and tanks have been amassing there since Monday, apparently planning for a land invasion of Gaza to accompany the airstrikes that have been ongoing all week, and have destroyed at least thirty buildings, including high rise apartment and office buildings.

According to the Palestinian Ministry of Health, two Palestinians were moderately wounded in their legs with live gunfire from Israeli snipers. The injuries took place at the protest east of Jabaliya, in the northern part of the West Bank.

Hundreds of thousands of Palestinians from all over Gaza are expected to participate in the Land Day protests on Saturday, and Palestinian leaders have urged the Israeli military to show restraint and to stop their practice of indiscriminately firing live ammunition toward the unarmed protesters, as they have done every week since the protests began one year ago.