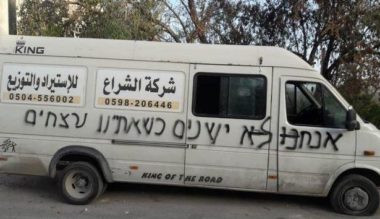 A group of fanatic illegal Israeli colonialist settlers invaded, on Monday at dawn, the village of Marda, in the West Bank governorate of Salfit, punctured tires of parked cars and wrote racist graffiti.

Bassam Ebdah, the deputy-head of Marda Village Council, said the colonists infiltrated into the village, and wrote anti-Arab, and anti-Palestinian graffiti on several walls and cars.

Opinion: ŌĆśWe Will Only be Moved as BodiesŌĆÖ: Israel and Bedouins Face Off in the Negev