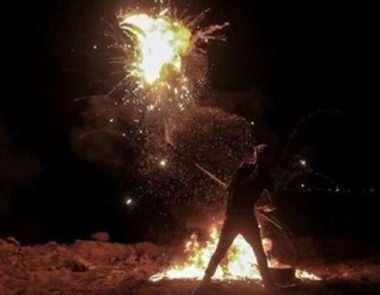 The Palestinian Health Ministry has reported, on Sunday at night, that Israeli soldiers injured four young Palestinian men, during the ongoing Great Return March protests along the perimeter fence, in the eastern parts of the Gaza Strip.

The Ministry said the soldiers shot a young man with a live round, east of the al-Boreij refugee camp, in central Gaza, before he was rushed to the Al-Aqsa Hospital.

It added that three other Palestinians suffered cuts and bruises, in addition to the effects of teargas inhalation, and received the needed treatment by field medics.

It is worth mentioning that many protesters used loud speakers to play Palestinian revolutionary and national songs, while others sounded alarms through mega phones, in addition to using laser pointers at soldiers across the fence.

On Friday, the army continued the excessive use of force against peaceful protesters on the 30th week of the March of Return and Breaking the Siege, and wounded 275 Palestinian civilians, including 49 children, 3 women, 3 journalists and 4 paramedics, the Palestinian Centre for Human Rights has reported.

Gaza fact sheet about why Palestinians are marching