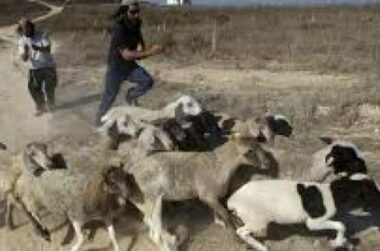 He stated that the colonists managed to steal seven sheep, in addition to causing severe damage to the barn, before fleeing to their illegal outpost.

The official added that the colonists came from Ahiya illegal outpost, which was installed on stolen Palestinian lands.

It is worth mentioning that the area is subject to constant violations by the colonists, who frequently cut and uproot Palestinian trees, attack farmers and shepherds, uproot lands, in addition to hurling stones at homes and other property, and various other assaults.

In addition, the Israeli army has recently stopped the Palestinians from preparing for paving an agricultural road that would benefit the farmers, under the illegal pretext that the area is a “closed military zone.”