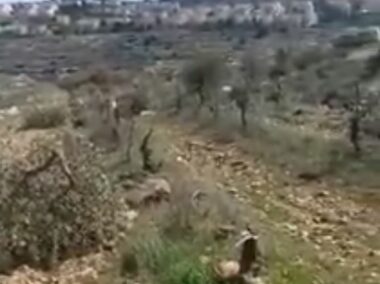 The assailants came from the illegal Bruchin colony, which was built on stolen Palestinian lands, owned by the villagers.

Local sources said the attack led to uprooting several trees, in addition to cutting nearly 45 others.

The area is subject to frequent violations by the colonists who repeatedly invaded Palestinian lands, cut, and uproot trees, in addition to destroying property.

Israel’s colonies in the West Bank, including those in and around occupied Jerusalem, are illegal under International Law, various United Nations and Security Council resolutions, and the fourth Geneva Convention to which Israel is a signatory and a constant violator.