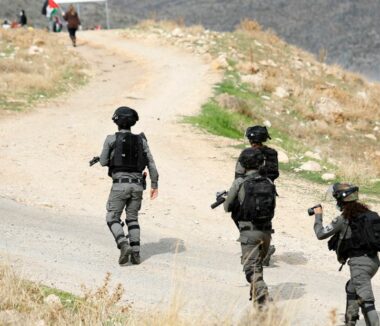 Israeli soldiers injured, Friday, three Palestinians with rubber-coated steel bullets, and caused dozens to suffer the effects of teargas inhalation after the army attacked two nonviolent processions in Ein Samia area in Kafr Malik village, and the eastern area of the al-Mughayer village, east of Ramallah.

Eyewitnesses said dozens of residents gathered in the center of Kafr Malik village, before marching towards their lands in the Ein Samia area, where illegal colonists are trying to install an outpost.

They added that the soldiers fired rubber-coated steel bullets, gas bombs, and concussion grenades at the Palestinians.

A young man was shot with a rubber-coated steel bullet in his leg, while dozens suffered the effects of teargas inhalation.

In addition, Marzouq Abu Naim, a member of the al-Mughayer Village Council, said several army jeeps closed the eastern entrance of the village, before preventing the Palestinians from marching towards their lands to join the protest in Ein Samia area.

Protests erupted after the army stopped the procession, and the soldiers shot two young men with rubber-coated steel bullets in addition to causing scores of residents to suffer the effects of teargas inhalation.