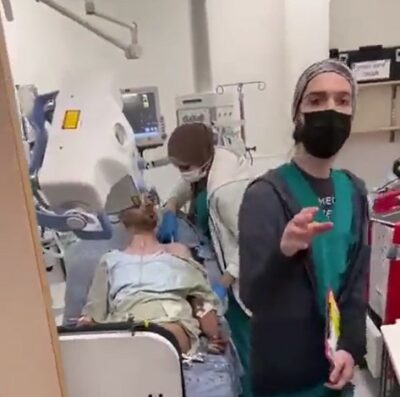 Media sources said the colonizer shot and moderately injured two siblings, identified as Mohammad and Jawad Aby Khadija, both in their thirties, from the Shu’fat refugee camp northeast of Jerusalem.

They added that the two Palestinians, and a child, were driving to the ar-Ram town northeast of Jerusalem before their car accidentally collided with a vehicle driven by an illegal Israeli colonialist settler.

The colonizer stepped out of his car with his rifle before shooting Mohammad in the abdomen and Jawad in the leg.

Medics moved the two wounded siblings to a hospital in occupied Jerusalem.

Talking to the Wadi Hilweh Information Center In Silwan (Silwanic), their uncle said Mohammad was shot with two live rounds in the abdomen, while Jawad was shot in the leg.

He added that the incident was just a traffic accident and said that the siblings and the colonizers were arguing about who caused the accident; however, the colonizer went back to his car, grabbed his gun, and shot them.

“There is an intersection in the area where two lanes merge into one. That is when the accident happened,” the uncle stated, “However because they are Palestinians and he is an Israeli colonizer, he interpreted the accident as a ramming attack and decided to shoot them.”

The Palestinians were driving to a wedding when the accident occurred; the child who was with them was Jawad’s five-year-old son, was not harmed, and a Palestinian resident who was passing through the area took him to his house and contacted the family.