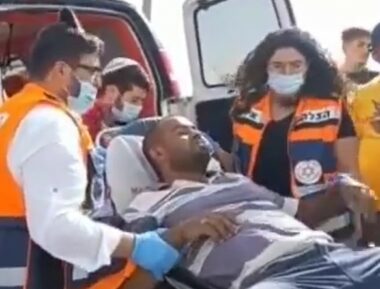 Updated: Israeli colonizers attacked, Tuesday, a Palestinian family on their lands in Lasefer village, in Masafer Yatta, souther of the southern West Bank city of Hebron, wounding nine, including a child.

Palestinian medical soures said a child, only four years of age, suffered fractures in the skull, and was moved by an Israeli ambulance to Soroka Medical Center.

They added that eight Palestinians were injured, some suffered fractures, and others were stabbed or slashed by the Istaeli assailants.

Israeli soldiers arrived at the scene and fired many concussion grenades and gas bombs at the Palestinians, causing many to suffer the effects of tear gas inhaltion.

Media sources said the family’s land is isolated behind the illegal Annexation Wall,  and a week ago, they were able to enter it and work on it after receiving a permit from the Israeli army.

They added that the Palestinians, from Abu Qbeita local family, were working on their lands before several Israeli colonizers assaulted them, wounding Othman Qbeita, who was rushed to a hospital.

After the attack, the Israeli army declared the lands a closed military zone, preventing the Palestinians from entering for 24 hours.

It is worth mentioning that, a day earlier, the colonizers attacked several members of the family in front of their homes.

The family was denied access to lands for more than four years and was eventually granted a permit to enter certain parts of the lands, a week ago, after extended court hearings and motions.

The shepherd suffered cuts and bruises in his head and various parts of his body before he was moved to a Palestinian hospital, in Hebron.