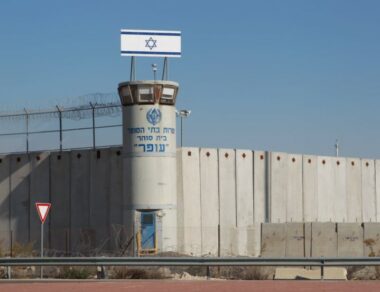 The Palestinian Prisoners’ Society (PPS) has reported, Wednesday, that the Israeli army has escalated its violations against the Palestinian detainees in Gilboa prison, and added that one detainee retaliated by splashing a soldier with hot water.

The PPS stated that the detainee, Malek Hamed, from Silwad town east of the central West Bank city of Ramallah, splashed an Israeli soldier with boiled water in retaliation to the escalation against the detainees.

The PPS added that the soldiers assaulted Hamed, before forcing him into solitary confinement.

The PPS also said that the army transferred all the detainees from section 3 of Gilboa to Shatta prison, and added that the soldiers reputedly assaulted many detainees.

Israeli Ynet News claimed that the soldier was attacked during the transfer of the detainees to other prisons, and added that he did not suffer any injuries.

Ynet also stated that dozens of detainees, affiliated with the Islamic Jihad movement, were forced into solitary confinement, and added that the Prisons Commissioner has ordered the transfer of all Islamic Jihad detainees to various prisons.

It added that 170 detainees have been transferred, and more than 400 will be moved to other facilities by the end of this week.

Furthermore, dozens of soldiers were sent to the Ramon Israeli prison, ahead of plans to transfer all detainees who are members of the Islamic Jihad to various sections in the facility and other prisons.

On Wednesday morning, several Israeli military vehicles invaded the town of Ya’bad, southwest of the northern West Bank city of Jenin, and abducted six Palestinians, including the father of one of the political prisoners who managed to escape.

During the invasion, the soldiers also injured many Palestinians, including schoolchildren, and uprooted trees.