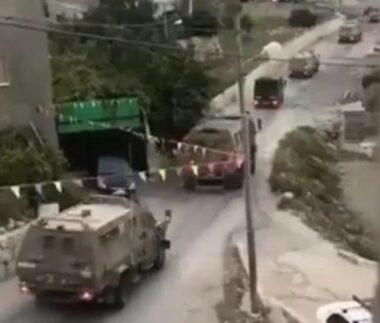 Several Israeli military vehicles invaded, on Wednesday morning, the town of Ya’bad, southwest of the northern West Bank city of Jenin, and abducted six Palestinians, including the father of a political prisoner who recently managed to escape from an Israeli prison along with five other detainees. The soldiers also injured many Palestinians, including schoolchildren, and uprooted trees.

Media sources in Jenin said the soldiers invaded Ya’bad town, before storming and ransacking the home of Ya’coub Enfei’at, the father of Monadel, one of six detainees who managed to escape from Israeli prison two days ago.

They added that the soldiers interrogated the father and his family while ransacking their home, before abducting him.

The soldiers also abducted a former political prisoner, identified as Raddad ‘Aadra, and his brother Shaddad, from their home in Arraba town, southwest of Jenin; the two are the brothers of detainee Mahmoud ‘Aarda.

During the invasions, the soldiers also abducted two former political prisoners, identified as Ahmad and Bassem Qassem ‘Aarda, the brothers of Mohammad who is imprisoned by Israel, in addition to abducting Dr. Nidal ‘Aarda and confiscating surveillance recordings from his home.

The invasions led to protests, before the soldiers shot a school student with a rubber-coated steel bullet in the head, in ‘Arraba, and caused dozens of schoolchildren, and residents in their homes, to suffer the effects of tear gas inhalation, in Arraba town.
The soldiers also invaded Aneen village, west of Jenin, and demolished a parking structure, in addition to bulldozing lands and uprooting olive trees near the Annexation Wall.

Two days ago, six Palestinian political prisoners managed to escape from the heavily fortified, high-security Gilboa’ Israel prison, through a tunnel in their cell.

The Israeli army, the police, intelligence services, and various Israeli security agencies have since been carrying out massive search campaigns in an attempt to locate them.

Despite interrogating the families of the escaped detainees, the extensive security measures, large-scale search campaigns, and intense cooperation between the various security, military, and police agencies, Israel remains unable to even find answers on where they could be.

The Israeli authorities have admitted that, despite the massive search, they remain unable to make any progress in their efforts to recapture them, and said that it “seems likely the detainees were able to cross into Jordan.”