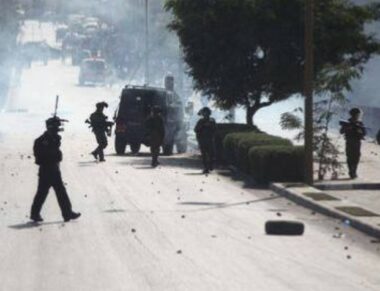 Israeli soldiers injured, on Wednesday evening, more than 100 Palestinians at the junctions of Beita and Huwwara towns, near the northern West Bank city of Nablus, after the army attacked protesters who marched in solidarity with the Palestinian detainees.

Ahmad Jibril, the head of the Nablus branch of the Palestinian Red Crescent Society (PRCS) said a young man was shot with live fire in the leg, near the junction of Beita town, southeast of Nablus, before the medics rushed him to a hospital in the city.

In related news, the soldiers abducted Mohammad Mousa al-Abbassi from the courtyard of the Al-Aqsa Mosque, in occupied Jerusalem. Mohammad is a former political prisoner from Silwan town, in Jerusalem.

Protests also took place in the al-Isawiya and the at-Tour towns, in Jerusalem, before the soldiers fired many gas bombs at protesters and surrounding homes, causing several injuries.