Army Injures Dozens Of Palestinians, Abducts One, Near Jenin 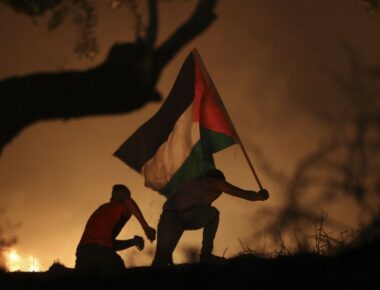 Israeli soldiers injured, on Wednesday evening, dozens of Palestinians, and abducted one, during protests in Arraba town, south of the northern West Bank city of Jenin. The soldiers also invaded orchards and farmlands and conducted extensive searches.

They added that dozens of Palestinians suffered the effects of tear gas inhalation, and many sustained cuts and bruises. The soldiers also invaded and ransacked several homes in the town.

In addition, the soldiers installed a military roadblock at the junction of Arraba town, before stopping and searching dozens of cars, and abducted a young man, identified as Ezzeddin Marzouq, who is studying medicine at a university in Jenin.

Local sources said the abducted young man is the nephew of Mohammad Qassem al-‘Aarda, one of the six Palestinian political prisoners, who managed to escape from the heavily fortified, high-security Gilboa’ Israeli prison.

Furthermore, the soldiers surrounded and isolated Be’er al-Basha village, southwest of Jenin, in addition to the areas around Ya’bad town.

Also, the soldiers caused dozens of Palestinians to suffer the effects of tear gas inhalation in Be’er al-Basha and Ya’bad, and installed roadblocks in the area, before stopping and searching dozens of Palestinian vehicles, and interrogated the residents while inspecting their ID cards.