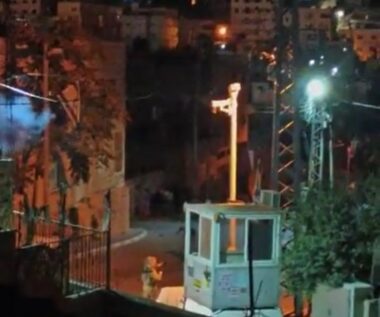 Many illegal Israeli colonizers attacked, late on Tuesday night, several Palestinian homes in Jaber neighborhood, near the Ibrahimi Mosque, in Hebron city, in the southern part of the occupied West Bank.

Aref Jaber stated that the colonizers invaded the neighborhood while firing live rounds in the air, before storming homes.

“They attacked our neighborhood while firing live rounds,”  Aref said, and then the soldiers came and invaded my home instead of removing the colonizers who attacked us.”

Local sources said more colonizers were seen gathering in the area, and sounds of additional live fire could be heard before they stormed a few homes in the area.

There have been no reports of injuries or arrests at the time of this report.

It is worth mentioning that the attack is part of constant violations by the colonizers and the soldiers against the Palestinians in Hebron, especially in the center of the city.

A week ago, a group of fanatic colonizers attacked many parked Palestinian cars in the Old City of Hebron in the southern part of the occupied West Bank, causing damage, in addition to attacking several homes.