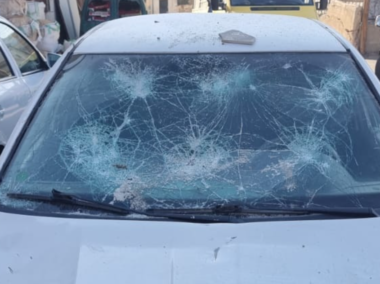 Illegal Israeli colonizers caused considerable damage, on Sunday at dawn, to several Palestinian cars in Jaber neighborhood, near the Ibrahimi Mosque in Hebron city, in the southern part of the occupied West Bank.

Badea’ Dweik, the head of the Civilian Committee of Human Rights Defenders, stated that the colonizers attacked many Palestinian cars owned by the residents in the neighborhood, and were parked near their homes. Dweik added that the colonizers smashed the windshields and windows on the parked cars, slashed their tires, and caused serious damage to their hoods and doors.

He stated that the attack comes amidst a serious escalation of these violations against the Palestinians in several parts of the city, including the Old City, where colonizers live in various illegal colonies and outposts.

Dweik also said that the Sunday dawn attack came just hours after Israeli soldiers closed and isolated many Palestinian areas in the city, including Tal Romedia neighborhood and the Shuhada Street, in the center of the city, and prevented the Palestinians from entering or leaving them for several hours.