Soldiers Shoot A Palestinian Near Bethlehem 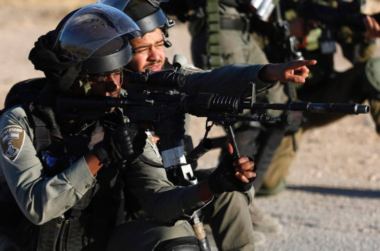 Israeli soldiers shot, on Saturday at night, a young Palestinian man in Husan village, west of Bethlehem, south of the occupied Palestinian capital, Jerusalem, in the West Bank.

They added that the soldiers fired many live rounds, gas bombs, and concussion grenades at the protesters and surrounding homes.

Medical sources in Bethlehem city said the soldiers shot a young man with a live round in the thigh before the Palestinian medics rushed him to a hospital.

On Sunday at dawn, Illegal Israeli colonizers caused considerable damage to several Palestinian cars in the Jaber neighborhood, near the Ibrahimi Mosque in Hebron city, in the southern part of the occupied West Bank.

Also at dawn, the army fired several missiles into areas in Gaza City and Beit Hanoun, in the besieged Gaza Strip, causing damage.