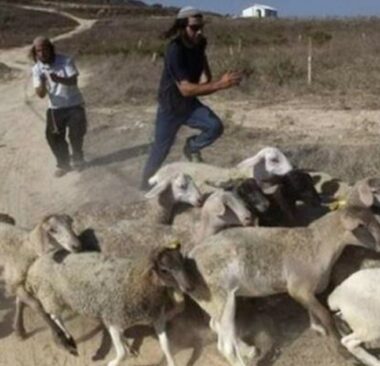 On Monday morning, illegal Israeli colonizers attacked Palestinian shepherds near the Khallet Makhoul area, in the Northern Plains of the Jordan Valley, in the occupied West Bank.

Palestinian human rights activist Aref Daraghma said the colonizers invaded grazing lands in the eastern area of the village and attacked the shepherds.

Daraghma added that the colonizers threatened to shoot the shepherds and their livestock if they did not leave the area.

The colonizers frequently attack the Palestinian shepherds and farmers in the area, and in many cases, unleash their dogs on them, in addition to constant invasion into farmlands to uproot and bulldoze them.

In Nablus, in the northern West Bank, Israeli soldiers invaded the eastern area of Rojeeb town, east of the city, and handed Hilal Rawajba and Mohammad Rawajba military orders to halt the construction of their homes on their privately-owned lands.