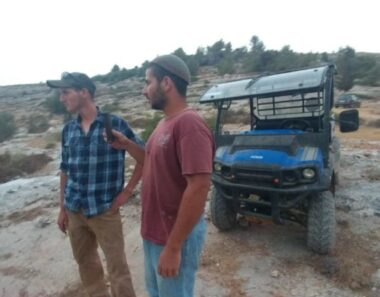 Illegal colonizers attacked, on Friday evening, a Palestinian family while picnicking on their lands on a Palestinian mountain near Kafr Ni’ma village, west of the central West Bank city of Ramallah.

Thafer Ataya, from Kafr Ni’ma, said that he and his family were picnicking and eating dinner on their privately owned land in the northern part of the village, when at least two colonizers, who were riding four-wheeler off-road vehicles, assaulted them and tried to force them away.

“I was there on my land with members of my family, including women and children when the colonizers assaulted us,” Ataya stated, “Shortly afterward, Israeli soldiers arrived and got the assailants to leave.”

He also stated that “despite knowing what happened, and the fact that we were on our land, the soldiers told us that ‘we should not cause trouble and just leave’.”

The colonists came from the illegal outpost, they dubbed as “Sde Ephraim” that was installed on stolen Palestinian lands in the ar-Reesan mountain which belongs to the Palestinians from the villages of Ras Karkar, Kharbatha Bani Harith, and Kafr Ni’ma.

The lands where the attack took place are also close to an Israeli military roadblock and are subject to escalating violations.

It is worth mentioning that the family, and many other Palestinians, have been frequently attacked by the colonizers several times before, as they continue their attempts to illegally annex the lands to expand their outpost.