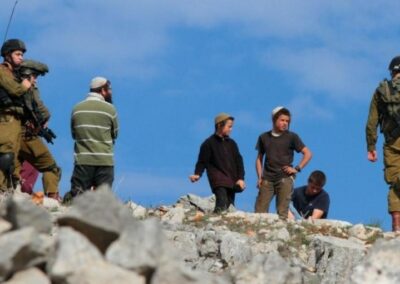 Ghazal added that the colonizers also pepper-sprayed the three women and forced them out of the lands.

The illegal colonists have recently escalated their violations against the Palestinians in Kisan, including targeting farmers and shepherds to force them out of their lands, in addition to several incidents where Israeli soldiers abducted many residents fending off the colonizers’ attacks.

These violations include releasing dogs to chase and maul the Palestinian farmers, firing live rounds at them, physically attacking them, and forcing them out of their lands, in addition to various incidents of cutting and uprooting trees.

The colonizers attacked a Palestinian shepherd in Kisan on Friday before Israeli soldiers abducted him instead of removing the assailants.

In related news, the illegal Israeli colonizers installed a new outpost on stolen Palestinian land in the Birin area, east of Yatta, south of Hebron, in the southern part of the occupied West Bank.