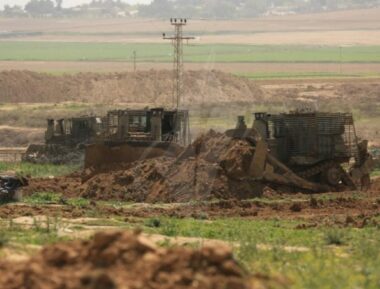 Israeli soldiers and a Group of fanatic illegal Israeli colonizers bulldozed, Wednesday, large areas of Palestinian lands near Nablus, in northern West Bank, apparently in preparation for construction of an outpost.

Ghassan Daghlas, a Palestinian official who monitors Israel’s illegal colonialist activities in the northern West Bank, stated that the colonizers, accompanied by many soldiers, brought three bulldozers and started bulldozing the lands.

He added that the targeted Palestinian lands, at least 30 Dunams (7.41 Acres), are in the Kafr Atiyya area between the villages of Aqraba, Joreesh, and al-Majdal.

Daghlas also stated that the Palestinians were not informed or given any written orders from the military regarding the bulldozing of their lands, however, such violations usually precede the official illegal annexation of the lands for the construction of colonies.