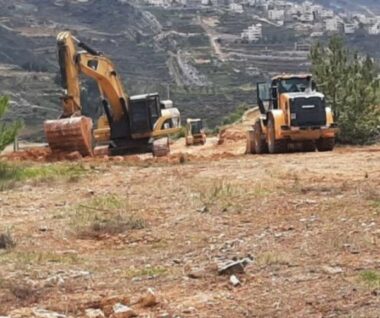 Ghassan Daghlas, a Palestinian official who monitors Israel’s illegal colonialist activities in the northern West Bank, said the colonizers are trying to expand the illegal Yesh Kodish colony, and added that they uprooted and bulldozed large areas of land.

Daghlas stated the colonizers are ongoing with their illegal colonialist activities in several areas around Nablus.

In related news, the colonizers scattered poisoned wheat grains in pastures near the Khirbet Tana area of Beit Furik town, east of Nablus, to kill livestock and deprive the Palestinians of their land to displace them in preparation for seizing their lands.

The number of colonies on stolen Palestinian lands in the Nablus governorate is 13, in addition to 39 colonialist outposts.