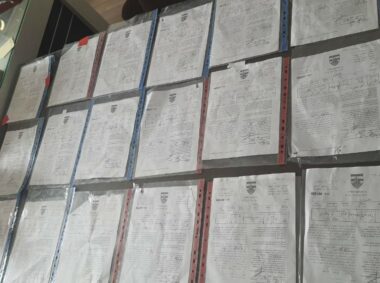 SALFIT, Tuesday, December 13, 2022 (WAFA) – The Israeli occupation forces today delivered 18 stop-construction notices against privately-owned Palestinian houses and structures in the town of Qarawat Bani Hassan, to the west of Salfit, under the pretext that they were built in Area C of the occupied West Bank and without a permit, according to a local official.

Mayor of Qarawat Bani Hassan, Ibrahim Asi, told WAFA that Israeli forces handed several town residents notices ordering them to stop the construction works on houses, some of them already inhabited, in addition to agricultural rooms, and factories.

The notices also ordered the stop of excavation works in the eastern part and at the southern entrance of the town.

Israeli forces delivered almost a week ago 10 stop-construction notices against houses in the same town.

Israel rarely issues construction permits to Palestinians living in area C of the West Bank, which constitutes 60 percent of the occupied West Bank and falls under full Israeli military rule, forcing many to build without permits.