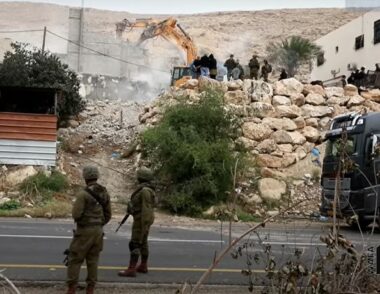 Media sources in Jericho, in the northeastern West Bank, said the soldiers invaded the Al-Jiftlik village, north of the city, and forced four families out of their homes before demolishing the properties.

Ahmad Abu Ghanem, the head of Al-Jiftlik Village Council, said the homes were about 120-150 square meters each and added that the demolitions led to the displacement of 20 Palestinians, including seven children.

The Israeli Information Center for Human Rights in the Occupied Territories (B’Tselem) said the soldiers also demolished two tents and two livestock pens and feeding troughs in a farm that supported the livelihood of two families, who together make 14 people.

In Nablus, in the northern West Bank, the soldiers invaded Furush Beit Dajan village and demolished an under-construction home in the southwestern area of the village.

The home, owned by Mohammad Hamed, was 130 square meters and was built on his privately owned land.

The Israeli army claims the demolished properties were built without permits from the so-called “Civil Administration Office,” the administrative branch of the illegal military occupation.

In related news, the soldiers abducted a Palestinian, Qussai Sa’id Yousef Bisharat, 23, after invading and ransacking his home in the Ar-Ras Al-Ahmar village, southeast of Tubas, in the central West Bank.

On Monday, a Palestinian from the Al-Isawiya town east of Jerusalem, in the West Bank, was forced to demolish his under-construction home.