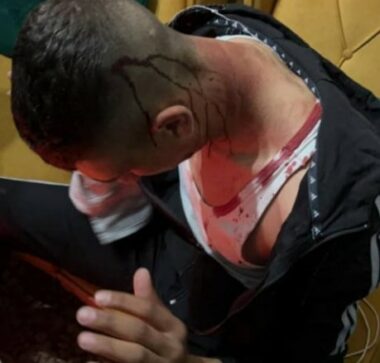 On Wednesday dawn, Israeli soldiers abducted twenty-three Palestinians from several parts of the occupied West Bank, including the occupied capital, Jerusalem, and repeatedly assaulted a young man, causing various wounds, including to the head.

The soldiers also invaded Arbouna village, northeast of Jenin, and stormed the home of Faisal Turkman before interrogating him and his family while violently searching the property.

Also in Jenin, the soldiers abducted Ahmad Nafe’ Kabaha and Mohammad Khalil Kabaha, from Toura village west of Jenin, after stopping them at a military roadblock at the village entrance.

In Nablus, in the northern West Bank, the soldiers invaded the Rafidia neighborhood in the city, Balata refugee camp, Zawata, and Rojeeb towns searched many homes before abducting four Palestinians.

During the invasion of Balata, the soldiers exchanged fire with several Palestinian resistance fighters before withdrawing.

In Qalqilia, in the northern West Bank, the soldiers abducted Mahmoud Teetan, 31, from his home in the city.

In the At-Tour town in Jerusalem, the soldiers stormed many homes, abducted a young man Amir Sayyad, and repeatedly assaulted his brother, Morad, causing various lacerations to his body, especially his head.

In Ramallah, in the central West Bank, the soldiers abducted a field paramedic, Ahmad Al-Ajjouri, after storming and violently searching his home in the Al Mughayyir village east of the city.

In the southern part of the West Bank in Hebron, the soldiers ransacked many homes and abducted Adam Taha Abu Sharar, Yousef Mohammad Abu Ras, Ahmad Salman Abu Sondos, and Tha’er Jihad Abu Sondos from their homes in Tabaqa and Abu Al-Asja villages southwest of the city.

In Doura town, south of Hebron, the soldiers abducted Rezeq Rajoub, Jadallah Rajoub, and Mohammad Kamel Qtail from their homes. Media sources said the soldiers released the three Palestinians after interrogated them for several hours.

The soldiers also abducted a young man, Anas Mohammad Jabarin, after stopping him at a sudden military roadblock they installed in Sa’ir town.

The soldiers also installed roadblocks at the main entrances of Hebron city, in addition to Sa’ir, Bani Neim, and Halhoul, stopped and searched dozens of cars, and interrogated many Palestinians while inspecting their ID cards.